You've seen the cards. You've learned the mechanics. You've read the story. And starting next week, you'll be able to brave the Cosmos and travel the realms, seeking glory and battle—and for some of you, reliable cellular service.

Our upcoming January game update brings the highly anticipated Viking-inspired plane of Kaldheim to MTG Arena, and it brings MTG Arena to the uncharted realms of pants pockets, couch potatoes, and socially distanced public transit. As with all sagas, it is a tale told over time, and today, our story begins with a card set.

Kaldheim will see the return of familiar mechanics like Sagas and modal double-faced cards, the new-to-MTG Arena supertype snow, and two brand-new mechanics, foretell and boast. 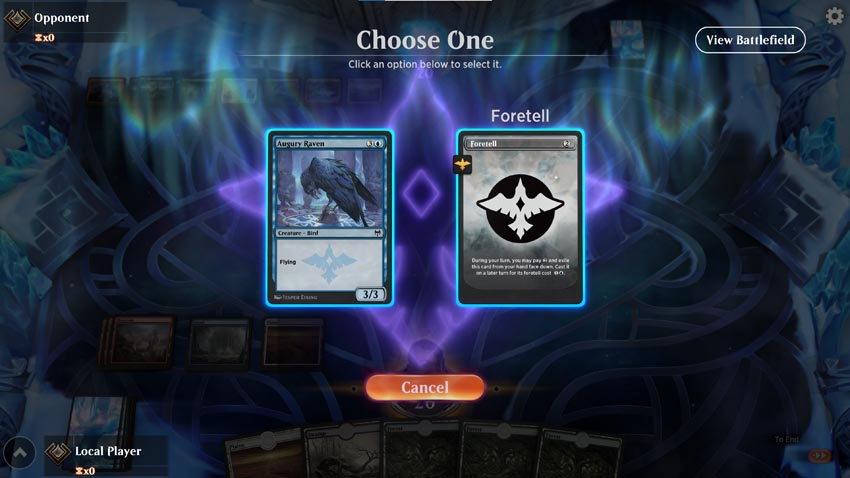 You can target a "face down" card to see additional information—such as the modified casting cost, whether it entered exile this turn—and the helpful reminder that a foretell card in exile is private information. Your opponent will just see a card back! 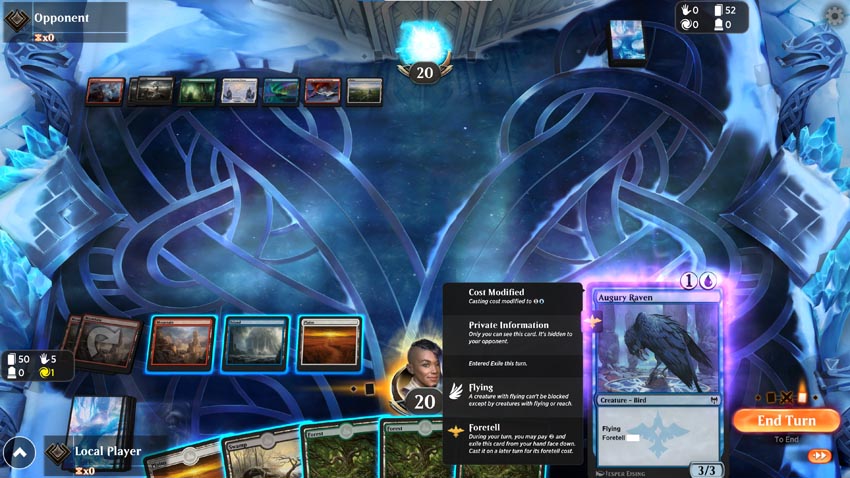 Since you can foretell a card any time during your turn, this does allow you to pay the cost and exile the card at times when you would otherwise be unable to cast it. Using our friend Augury Raven, you can foretell the notably flashless creature card mid-combat—though the normal creature version is grayed out. 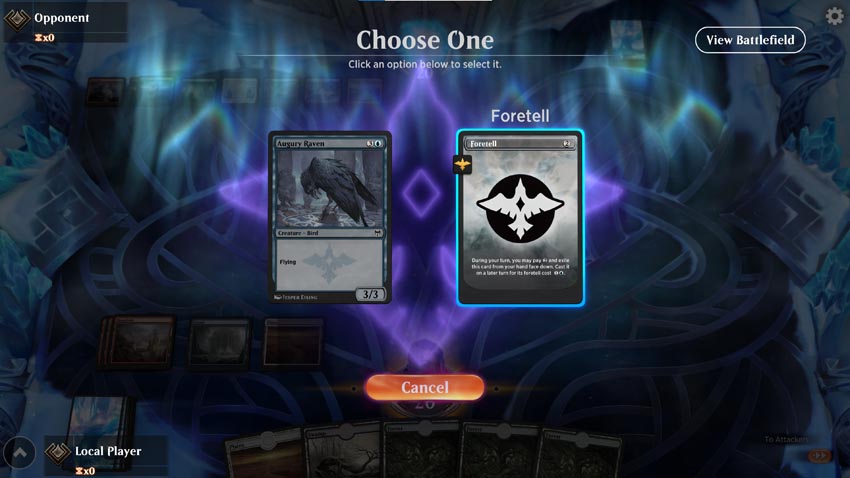 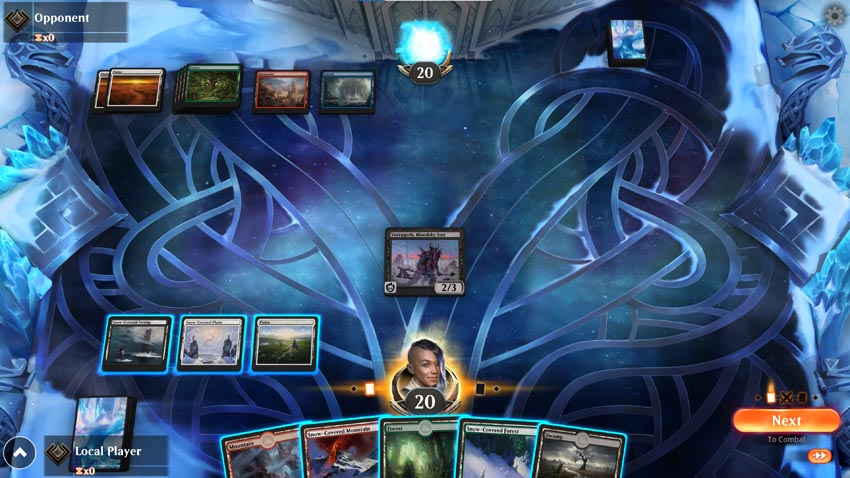 A boast ability is an activated ability that can be activated once a turn, but only if the creature that has the ability has attacked that turn. Did you attack with this creature this turn? 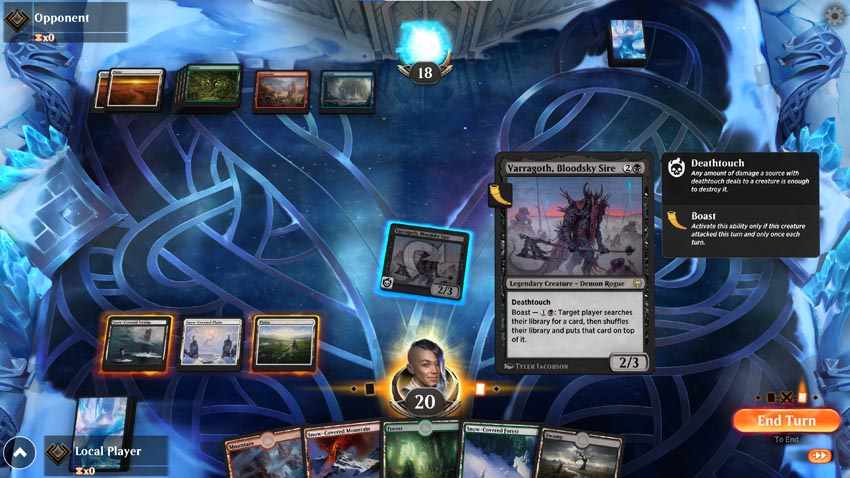 As a reminder, you can activate a boast ability any time in the turn after the creature was declared as an attacker—this includes during the attack step! 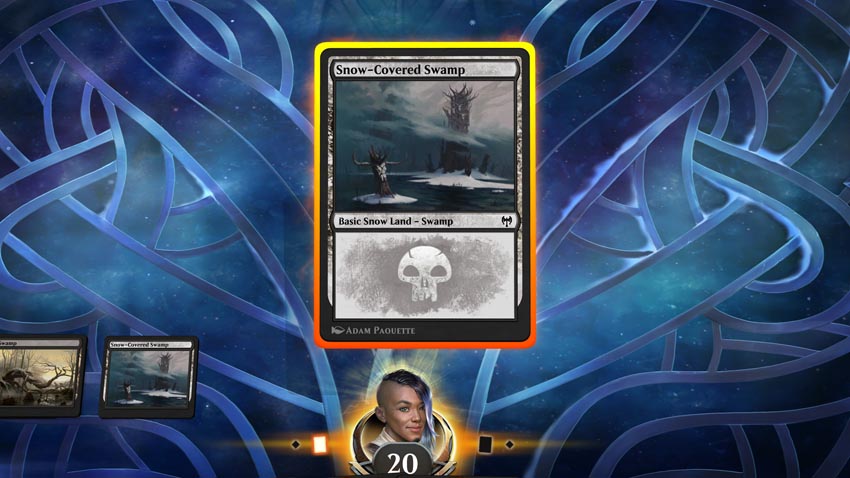 Last thing to cover in our Kaldheim "snow and tell"—the returning to Magic but new-to-MTG Arena supertype, snow! As discussed in the Kaldheim mechanics article, snow doesn't really do anything by itself, but it can be referred to by other cards in various ways. 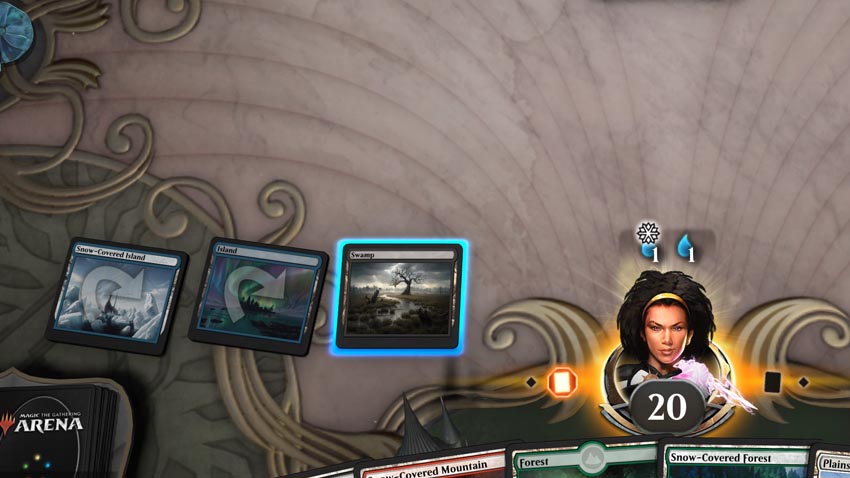 When tapping a snow mana source, we'll track the mana separate in your mana pool—even if producing the same color of mana as a non-snow type. For those of you who want to know how to add these super-nice basic lands to your collection, there's two ways to go about it:

Starting January 28, all the magic of Kaldheim will fit into the palm of your hand.

You will also find plenty of screenshots and descriptions to guide your way through the various sagas of mobile gameplay below, but for those of you who want the abridged version: it's MTG Arena on your phone. Clicks become taps, scrolls become swipes, and all the gameplay you love (and most of the features) will be at your literal fingertips.

Okay, let's start with the most important part—playing Magic. We made various adjustment to the battlefield layout to balance playing on the smaller and slightly more rectangular aspect ratio that mobile devices use, such as changing the size and location of player avatars.

Gameplay is very similar to what you see on desktop, albeit with touch controls. For example, when determining your opening hand, you tap the respective button to keep or mulligan, and if you choose the latter, you tap to select and drag cards to your library from your hand.

Tapping each respective zone (graveyard, library, exile, etc.) will bring up a browser that will allow you to inspect any known cards, as well as to see the current number of cards in that zone.

We recommend playing a few bot matches against Sparky to familiarize yourself with some of the control and layout differences!

CARDS IN HAND, CASTING SPELLS, AND YOU

Periodically during a match, your hand may appear "tucked" to give a better view of the battlefield. Tapping the cards in your or your opponent's hand will fan them out, making them easier to read and select. Tapping and holding a card allows you to see it in detail (like mousing over a card when playing on a desktop). Tapping the battlefield will tuck them away once more.

There are also automatic tuck and untuck behaviors, where the game will do the work for you. Our goal was to make it feel relatively natural once you start playing with it, however, you always have the option to tuck or expand your hand as you deem fit.

Mana can be added to your mana pool manually, or you can take advantage of the auto-tap feature. Tap and hold to select a card, then drag it over the battlefield to cast it.

Tap your avatar to use emotes and view your timeouts or select and hold your avatar to enable or disable full control. Tap your opponent's avatar if you wish to mute them or see their timeouts. When applicable, an arrow labeled "undo" will appear on the top right of the screen that you can tap to undo certain actions.

Additional gameplay options are available under the settings menu, which you can access by tapping the cog wheel in the top right.

Viewing your collection and deck building is very similar to the experience on desktop, with the previously mentioned changes for touch controls. You swipe left or right to browse through your collection, tap cards to add or remove them from your main deck, and tap the sideboard button to toggle between your deck and your sideboard.

You will be able to sort your collection using all the tools available on desktop, including search or advanced filters. When deck building on a mobile device, we currently only support the layout as shown (two rows of cards when viewing your collection, list view of your deck).

You will be able to participate in all our current events on mobile devices, including Player Draft! During the draft, tapping once will select a card as your current pick. You can confirm your pick by either quickly double-tapping the card or selecting a card and dragging it to your list.

AND ALMOST EVERYTHING ELSE!

As we noted in our announcement article, Android early access will be available to all players with compatible devices everywhere MTG Arena and the Google Play store are currently available. You will be able to log in with your existing Wizards Account, use your current collection, play with your existing decks, and swap between mobile and desktop devices as you prefer.

Direct Challenge will be available, though other social features (Friends List, Direct Messaging) won't be available until later this year. Additionally, code redemption is not available on mobile devices. For more technical and account information, check out our dedicated Mobile FAQ.

IT'S MAGIC ON YOUR PHONE

Okay, now to address the scute swarm in the system. Yes, some games of Magic can be rather complex. There may be decks or board states that aren't as conducive to mobile play due to the intrinsic limitations of the platform.

However, the potential for explosive or complicated gameplay is what makes Magic, Magic. We do not intend to change how we approach Magic design to specifically accommodate mobile play. Nor do we wish to provide a limited, watered-down mobile experience. Instead, our goal is to optimize and make improvements to the gameplay experience across all of our platforms so that playing on your phone is just another "and" to the Magic experience. We're most of the way there, and you'll see improvements in the months ahead as we expanded our supported devices.

Sticking with our routine, we did want to take a moment to update our roadmap for the first part of 2021. As you could probably guess, most of our development right now is focused on bringing MTG Arena to mobile devices. In addition to this, we're also planning a record number of card set releases with five(!) Standard sets planned for 2021, in addition to continued support for Historic.

While we're off to a big start, it's just the beginning! In addition to these major milestones, you can also expect bug fixes and quality-of-life improvements in the weeks and months ahead.

Forge your legend! Raise your axe! The saga is only beginning, so make sure to pack a phone charger! Kaldheim and Android Early Access will be arriving next Thursday, January 28 on MTG Arena. Keep an eye on our status page for the latest information on maintenance times and follow us @MTG_Arena for the latest updates.

Not soon enough? Tune into some of your favorite content creators as they immortalize their deeds in song and story during our Kaldheim early access event on January 27.