IT'S TIME TO GRIN AND BEAR IT

Time Spiral Remastered is a hot set. I don't just mean it in "a limited product run, much like a Masters set" sense but also a "filled with fun, fiery cards" sense. For example, there's a familiar face joining the set with a retro frame treatment on the bonus sheet: Kiki-Jiki, Mirror Breaker. 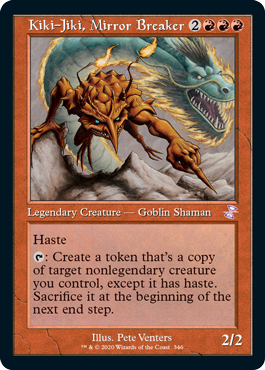 Kiki-Jiki is an iconic Goblin that players of Commander and Cube Draft will recognize immediately. His ability is simple—just create a temporary copy of any creature you have until the end of the turn—but can work in some amazing ways.

Let's start simple: doubling up the value of creatures with enters-the-battlefield or dies triggers. (Note: There are several of these kinds of creatures in Time Spiral Remastered.) 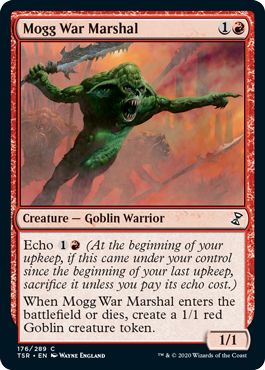 If you can afford the six mana for Kiki-Jiki, Mirror Breaker, then you likely have more powerful creatures to consider, but bear with me here. Mogg War Marshal is a solid card in drafts because it deploys two token creatures—one on its way in and the other on its way out—and provides tremendous value for just two mana.

Kiki-Jiki copying it turns out pretty great: make an extra token upfront then another when you sacrifice the copy of the Mogg in the end step. But we can do better than that. 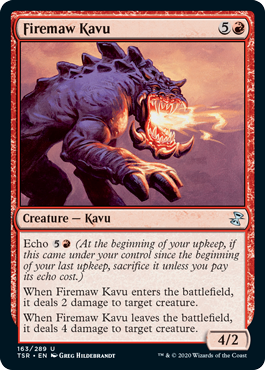 Now we're cooking with literal fire! Firemaw Kavu also has a pair of enters-then-dies triggers, dealing 2 damage on the way down and 4 more on the way out to a target creature. Copying this with Kiki-Jiki can put 8 damage onto the same creature in one turn—2 each from the enters triggers, then 4 more from the dies trigger when the token creature is sacrificed.

And Kiki-Jiki grants haste, so it's a free attack in there too if you'd like; you're going to lose the token no matter what, so might as well, right?

By now, you get the value red offers you in Time Spiral Remastered—plus some Kiki-Jiki shenanigans you might get up to—but there's even trickier things to do with copies of creatures. 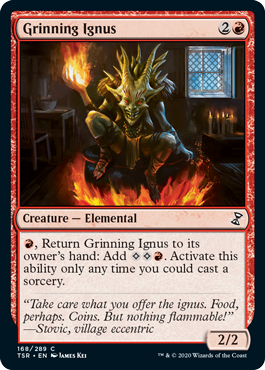 Grinning Ignus is a Gray Ogre without any triggered abilities. It doesn't give you anything on its way in or when it dies. It does have a somewhat unique activated ability to "return" the mana you spent casting it by paying just one red and returning it to your hand.

It's a bit like a "ritual" effect—named after Dark Ritual from Magic's first release—where you play a spell for a small amount of mana to get a temporary larger amount of mana, but here, there's no discount: You end up paying a total of four mana to have three to use—which is a net of only two after counting the red you spend.

But using your time wisely (see what we did there?) over two turns can set up interesting things. For example, if you play Ignus on your third turn, you can play a fourth land on your next then pay to return Ignus for the mana "back" and end up with six to spend—not bad for turn four, and that's probably good enough to cast something like Kiki-Jiki. If you're trying to play several spells all in the same turn, or a bigger speller earlier than your opponent would expect, Ignus can help you do that.

But Kiki-Jiki can take it to a level that's simply silly. While our legendary Goblin does make tokens that you're required to sacrifice, the timing is actually "at the beginning of the next end step," which means you can make a copy during an end step and have it stick around for a full turn.

Now you have three tapped Mountains, nine mana floating, and probably even more mana untapped to work with. What could you do with nine mana? (Pro tip: Make sure you have something from your draft to do with it!)