IT'S TIME FOR THE SLIVER LINING

While I learned the game—and received a handful of cards—from my friend at school, there was a year or so before I had the opportunity to make my very first Magic purchase. I wasn't exactly sure what to get, and this was long before I had fast internet and plenty of ways to see what was out there.

I looked over the booster packs and recognized the names of sets I'd been playing with: Mirage, Visions, Fifth Edition. But it was a larger package that caught my eye. It was purple, with a mean-looking dragon looking back at me underneath a radical set name: Tempest. 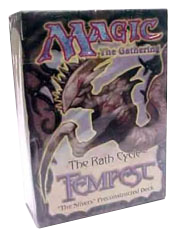 That box of Magic cards was called a "Starter Deck" and sounded exactly like what I was doing. I can vividly recall the moment I pulled the wrapper off the box, becoming more engrossed as I read every page of the included "storybook" that pulled me into the journey of the Weatherlight crew on the plane of Rath.

The exact details and contents are lost from my memory, and so are most of the cards I opened. One of my cards I read multiple times and couldn't fathom how it was remotely useful—Duplicity—but another blue card tipped me off to something different going on.

"What are Slivers? Do I even have any? Do they all give each other abilities?"

Questions soon became answered as I looked through the cards I'd opened.

Slivers rightfully earned their enduring popularity by giving you the best of it all: Slivers care about Slivers, grant their abilities to all the rest, and encourage you to build up a deck full of them simply by finding more.

The history of Slivers in Magic stretches from their initial appearance on Rath in Tempest to the overlay—merging—of Rath onto Dominaria during Invasion block, to their revival by Riptide scientists during Onslaught block, to their distant descendants surviving as the plane of Dominaria was dying during Time Spiral—and beyond.

That harsh environment of a post-apocalyptic Dominaria pushed Slivers to adapt with even stranger abilities from combinations of colors—or was as good a time as any other to design some using enemy color pairs for the first time—and brought a smile to the face of everyone that wanted to see even more.

Time Spiral Remastered wouldn't be a true trip to the past without the return of these iconic creatures. 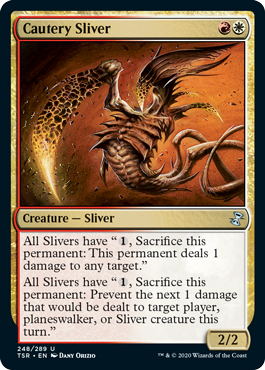 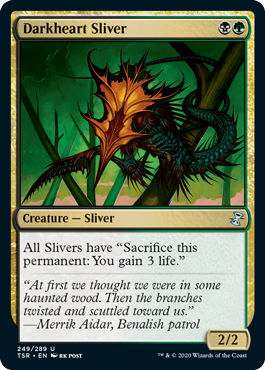 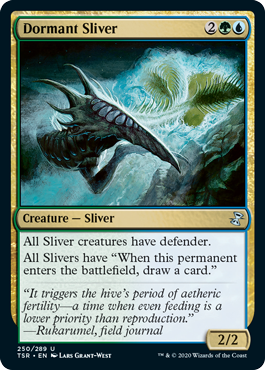 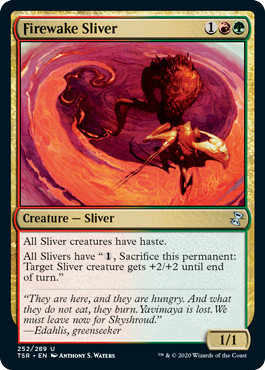 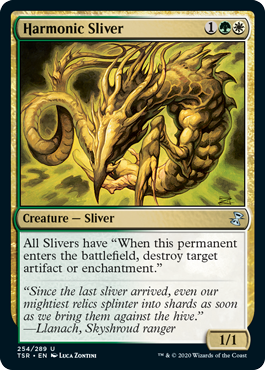 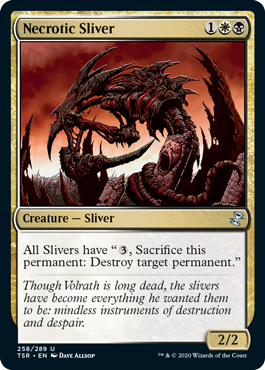 These Slivers offer quite a range of abilities. Firewake Sliver and Harmonic Sliver are nods to the powerful and useful enchantments Fires of Yavimaya and Aura Shards. Darkheart Sliver, too, references Dark Heart of the Wood—which is a little less powerful than Necrotic Sliver as homage to the sorcery Vindicate.

And if you caught that Dormant Sliver draws from Jungle Barrier—including defender to turn off their ability to attack—and Cautery Sliver makes them all into Goblin Legionnaires, then you have a sharp mind for Invasion block cards.

Riffing off older effects and spells is one thing Slivers are known for, but it's not the only one. While I didn't open her that day, Tempest Remastered had Sliver Queen, a Sliver with every color in its mana cost that represented the leader of the tribe. Sliver Queen makes more Slivers, a handy feature if you're playing all five colors and have Slivers—which would be a reason to have Sliver Queen and lots more Slivers.

You get how this works.

The next Sliver leader was Sliver Overlord, a legendary Sliver leader that can search up Slivers from your library and steal other Slivers hanging around that you don't control. Future Sight, too, brought back a venerable Sliver leader with Sliver Legion—a Sliver that represented its leadership by mimicking Coat of Arms for Slivers: the more Slivers in your "legion" that you play, the bigger every Sliver gets. 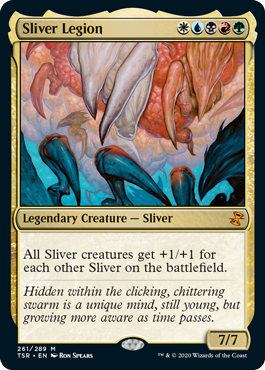 The "legendary Sliver that makes your Slivers way better" and "Slivers that staple other card abilities onto all of your Slivers" themes continued in both Magic 2014 and Modern Horizons—the latter set containing yet another Sliver that returns on Time Spiral Remastered's bonus sheet. 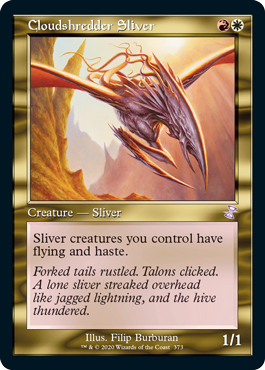 Cloudshredder Sliver makes each Sliver into Skyknight Legionnaire—a powerful creature in drafts—and promises to make "the Sliver drafter" a terrifying opponent to play against. It's also outstanding if you play Commander with a Sliver commander since flying and haste are excellent ways to attack with an army of Slivers.

Just maybe you might want to think carefully about when you drop that Dormant Sliver.