Friday and Saturday each feature three rounds of Standard, and Sunday's Top 8 playoff is exclusively Standard format. Here's how the metagame breaks downs: 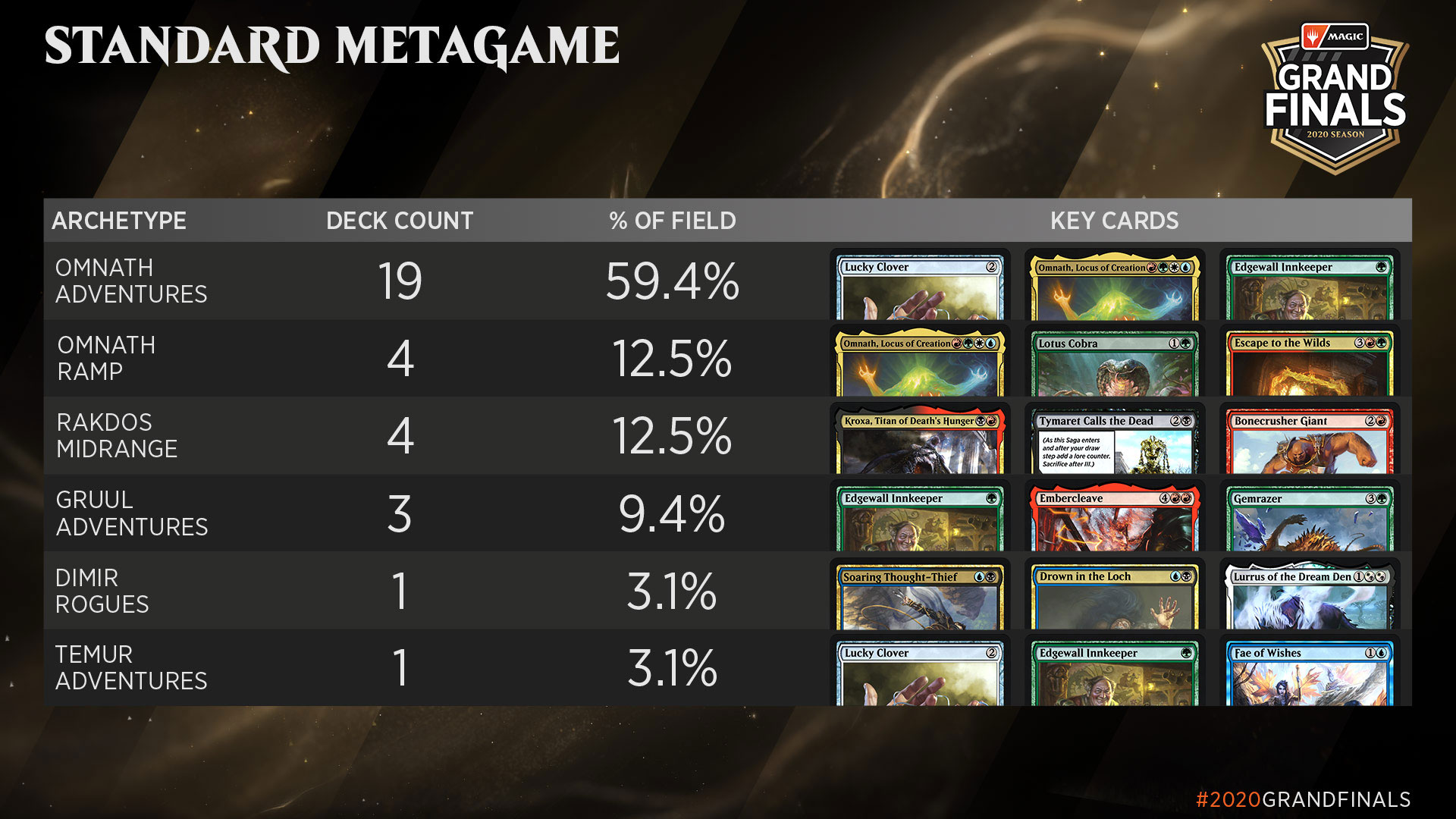 Combining Omnath Adventures and Omnath Ramp, 72% of the field is running  in Standard. Across Magic Esports, that's staggering numbers even for a small field. For reference, 69% of the players at Mythic Championship VI registered  and 68% of the players at the Players Tour Finals registered . So when 72% register Omnath it's clear which card is the villain of the current Standard metagame. 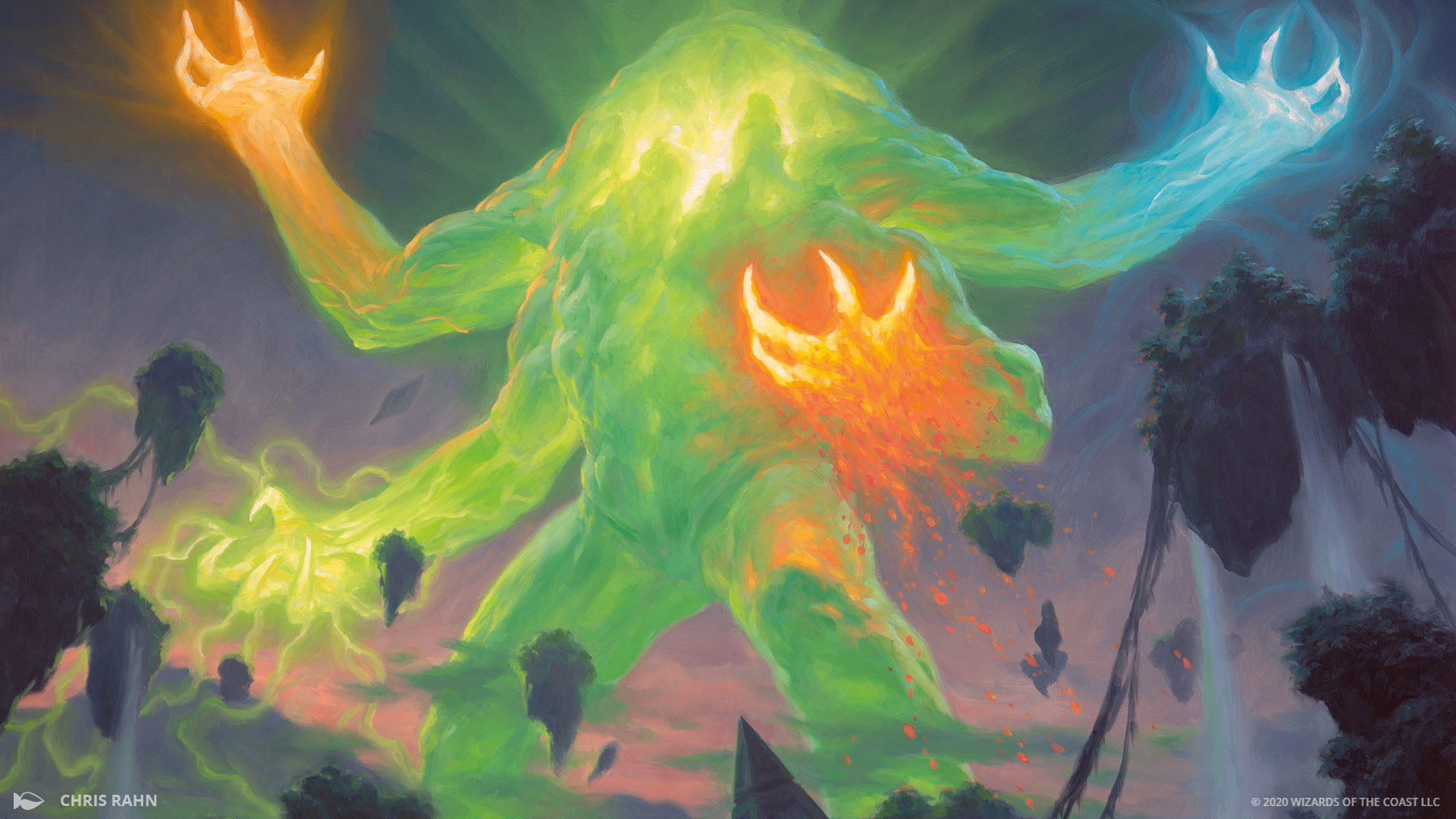 Why is Omnath so dominant?

It's a combination of two factors. First, triggering landfall for the second time in a turn is not difficult thanks to  or . After the second landfall trigger has resolved, Omnath is a  with better abilities that didn't cost any mana and didn't cost a card.

Second, despite being so many colors Omnath is not as difficult to cast as you'd expect. Between Pathways, Triomes, s, and mana fixers like  or , it's possible to consistently cast Omnath on curve without having to make substantial mana base sacrifices.

Can Omnath decks be beaten? Short answer: unclear, and 72% of players believe it's unlikely.

Going under—attacking early and outracing Omnath setting up—is difficult because Omnath gains 4 life per turn, so aggro decks must be able to deal far more than 20 damage each game. Resource denial strategies also face a tough fight because seemingly efficient answers like  or  still leave you down in mana and cards. Trying to go over Omnath implies ramping and therefore playing Omnath yourself, but that just results in joining 'em.

Perhaps the best way to beat Omnath is to counter it and prevent it from ever resolving. However, a counter-heavy control strategy has a hard time beating  or , which the majority of Omnath players have access to as Adventures decks, so it's hard to find a viable angle of attack.

Yet, 72% is not 100%. Nine brave competitors decided to face the four-color menace with a non-Omnath deck, and they might just be on to something. All decklists will be published on the 2020 Season Grand Finals event page at the beginning of Round 1 on Friday, October 9.

Let's review what each Standard archetype in the Grand Finals offers.

Omnath Adventures (19 players): Most players agree that the best way to play Omnath is to splash it in Temur Adventures. The core of the deck relies on , , and . A sideboard filled with a variety of one-ofs rewards the pilot for good decision making and sequencing. In this deck, Omnath is a redundant engine that synergizes nicely with the s and  that were already in the deck—and well worth splashing for.

Omnath Ramp (4 players): This deck playing Omnath does not run  or . Instead, the goal is play  on turn two, Omnath on turn three, and to put almost your entire deck onto the battlefield on turn four. Both  and  help trigger landfall, which  and Omnath turn into more mana. With a good draw, the battlefield can explode quickly.

Rakdos Midrange (4 players): Rakdos Midrange is a relatively new deck, but it's sweet one. Besides the spot removal and discard spells that are typically seen in midrange decks, the deck makes particularly good use of its graveyard.  sets you up perfectly to escape , which acts as the main win condition.  and  also synergize with this graveyard-based plan. There's no raw card draw, but a large number of modal double-faced cards prevent mana flood.

Gruul Adventures (3 players): This is the only aggro deck in the field.  provides some staying power, but the deck does not contain many adventure spells as the main idea is to curve out and drop a quick . While this archetype has been around in Standard for a year, the builds registered by Autumn Burchett, Emma Handy, and Luis Salvatto are spicy. For example, , a longtime mainstay in this archetype, has been replaced by . This makes sense because the metagame has more s than planeswalkers. Another tweak is that  and , which are perfect bodies for both for  and , became the early drops of choice. I like the build and believe in the 'Cleave.

Temur Adventures (1 players): This deck, registered by Grzegorz Kowalski, could be described as Omnath Adventures with  instead of Omnath. "I believe consistency and better mana curve is worth more than Omnath, so I would rather counter it for one mana in the mirror, than play it myself," he explained. That's a hot take but given that he was holding the #1 Mythic rank he also may just be right.

Dimir Rogues (1 players): This particular version of Dimir Rogues is the spiciest brew in the field. Surprisingly, the only Rogues in the deck are  and , so there is no reliance on . Instead, the mill theme is emphasized with , , and , and the lean creature base enables  as a companion. I am looking forward to seeing how this deck will perform against Omnath.

Friday and Saturday each feature three rounds of Historic, which was also shaken up by the release of Zendikar Rising. Previously, the three biggest decks in the format were Jund Sacrifice, Mono-Red Goblins and Sultai Midrange. With a new set in the mix, this is how metagame breaks downs: 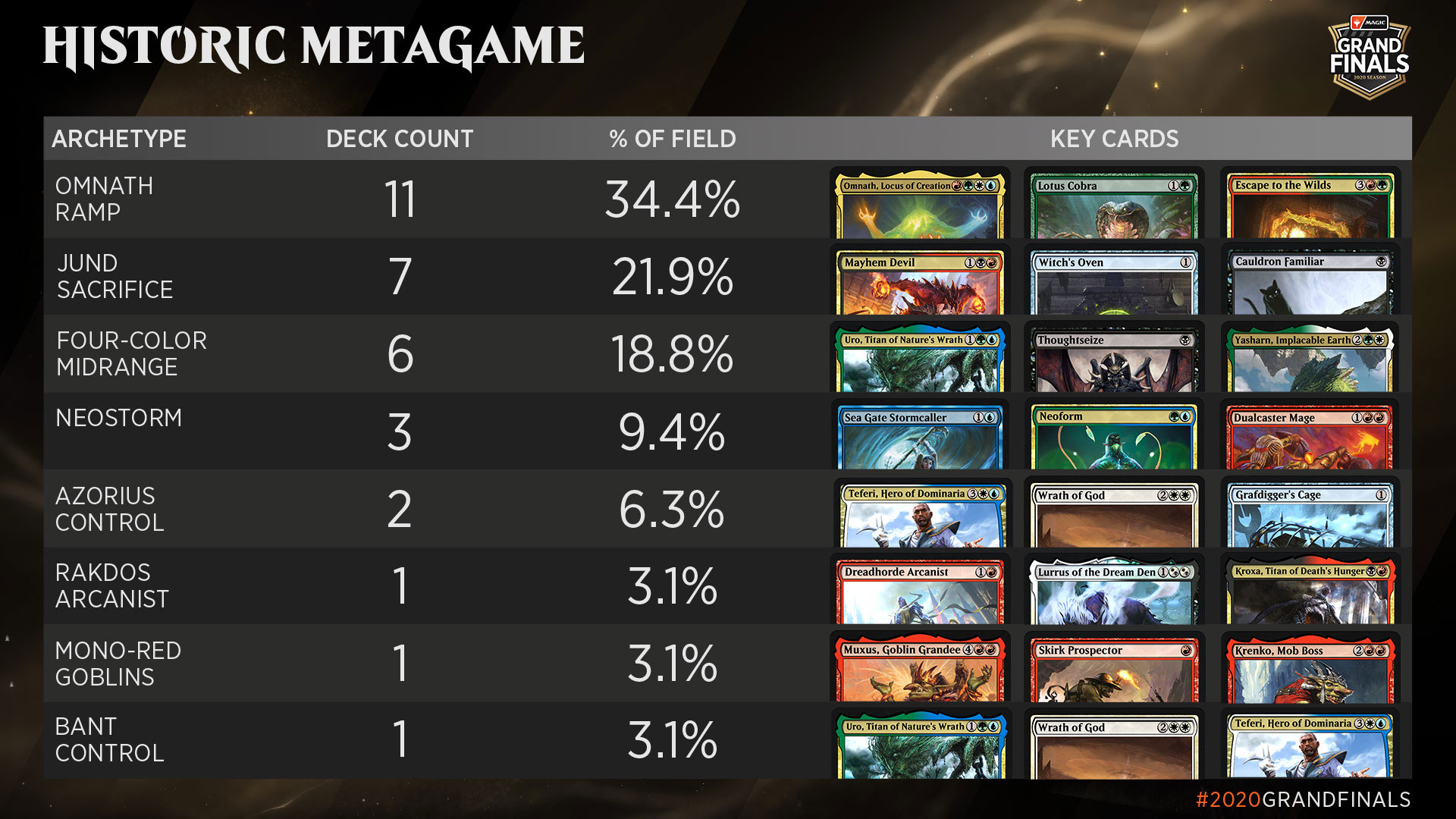 The good news is that it's "only" 34% of decks are playing . The bad news is that Omnath is powerful in Historic as well. But Omnath and  are not the only Zendikar Rising cards that made an impact: Sultai Midrange splashed  to turn into Four-Color Midrange, and  enabled an entirely new combo deck with .

Like the Standard decklists, all Historic decklists will be published on the 2020 Season Grand Finals event page at the beginning of Round 1 on Friday, October 9. For reference, I provide a quick summary description of every Historic archetype below.

Omnath Ramp (11 players): This is pretty much the Standard version of Omnath Ramp beefed up. Historic-legal cards like  and  make it even easier to trigger Omnath multiple times per turn and to play  ahead of the curve. As a result, all Omnath players in Historic opted for the Ramp plan rather than the Adventure plan.

Jund Sacrifice (7 players): Sacrifice is still strong as , , and  provide a powerful and synergistic engine. Green provides mid-game staying power, but there are two mutually exclusive approaches: Three players run , while four players rely on  instead.

Four-Color Midrange (6 players): The missing color is red, so there are no Omnaths here. Four-Color Midrange is an evolution to Sultai Midrange with a white splash for . Yasharn's static ability means that a Jund Sacrifice player can't sacrifice creatures to activate  or , and a Goblin player can't activate Treasures or sacrifice creatures to  or . As Yasharn is a Boar, the deck has already earned the affectionate nickname "Turbo Pig" which will only grow if someone brings home the bacon with it.

Neostorm (3 players): This Temur combo deck was made possible by . The plan is to trigger its enters the battlefield ability and follow up by sacrificing it to . The copy fetches , which copies the original  that's still on the stack. This copy fetches yet another , and the chain continues. When the s run out, s take over, and before you know it, you have seven 3/3s on the battlefield. Finally, the original  fetches , which grants haste and sets up a lethal attack out of nowhere. It's a powerful two-card, four-mana combo that can win before Omnath Ramp puts its entire library onto the battlefield. Although assembling a two-card combo and four lands by turn four is not trivial,  provides a substantial consistency boost.

Azorius Control (2 players): , , and  form the core of a traditional control strategy. One notable aspect is that both Azorius Control players run main deck , which is a good metagame call. The artifact stops ; ; ; ; and , so it's great against everything but the mirror.

Rakdos Arcanist (1 player): Rakdos Arcanist is arguably the best  deck in the format because of the synergy with both  and . This deck ups the discard angle with , which can be milled by  or returned via  or .

Bant Control (1 player): This is basically Azorius Control with a green splash for  and , passing on  because that would stop its own Uro.

Mono-Red Goblins (1 player): At the Mythic Invitational, Goblins was by far the most popular deck, but it posted a below-average win rate. Accordingly, it saw a sharp popularity drop. Nevertheless, with  it's still possible to cast  as early as turn three. If you're lucky enough to hit both  and  too then you may be able to attack for lethal right away. 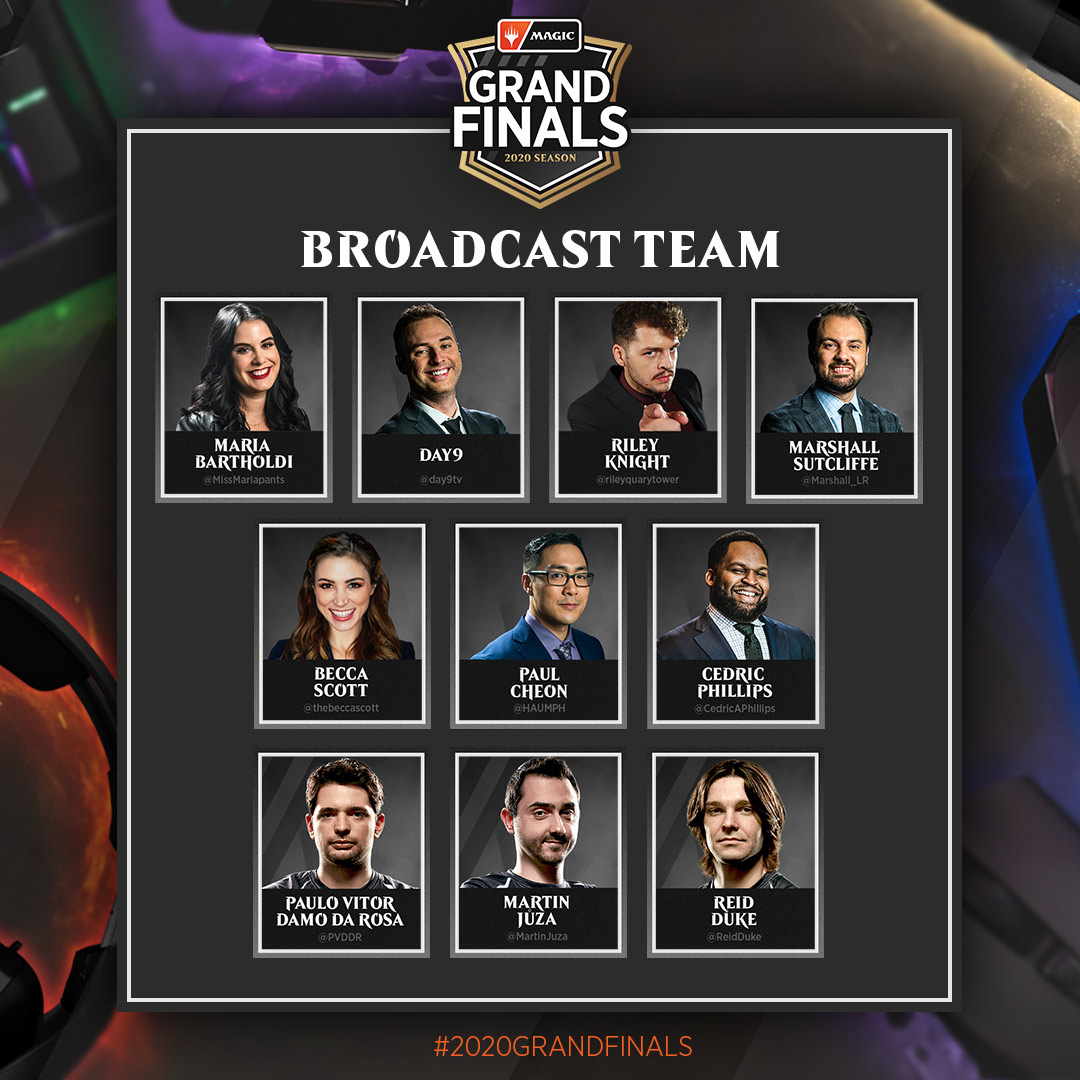 Catch the broadcast live on twitch.tv/magic, starting at 9 AM PDT each day, October 9-11, to see if Rakdos Midrange, Gruul Adventures, or Dimir Rogues can triumph over all the Omnath decks in Standard, to see the Neostorm deck combo off in Historic, and to see 32 amazing players show off their skills as a new champion is crowned!